Something I used to check back in my previous poker play ONLINE was my Non-showdown winnings...or as PokerTracker calls it...Red Line graph.  I was always negative in this category in the past and never really understood how to make a positive change to the graph.

Through my last 5000 hands I am just slightly profitable for my Red Line but all of the profits have come in the last 1000 hands.  Probably running above expectation but I hope to stay profitable or breakeven in the Red Line category.  My Showdown winnings are always very good and if I minimize or eliminate losses in non-showdown situations then I will be way ahead of the game.

Non-showdown winnings are situations where the winning hand doesn't have to be shown because yourself or the opponent didn't finish the hand through the river.   A few examples would be... 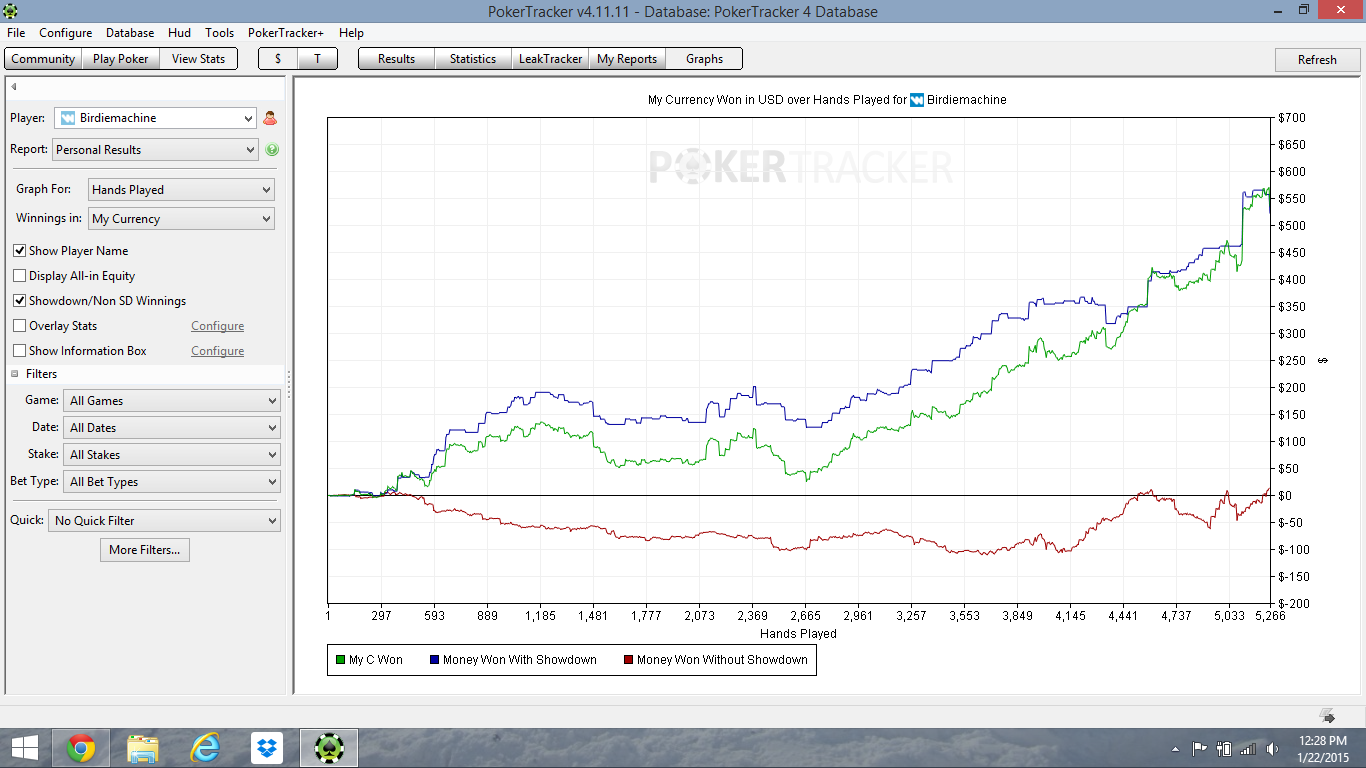 I'll continue to watch this statistic as it will definitely lead to better profits for my game.

Posted by birdiemachine at 12:45 PM No comments:

Discovered a pretty cool site for watching some online poker.  Most are pretty random dudes playing low stakes tournaments and a few cash guys, but I did find one that usually streams live for 6-8 hours a day on Monday-Friday.  He's a PRO from Atlanta named Joel Patchell...JPATCHE on Twitch.tv.  Most that are streaming are online GAMERS playing their various online games.  Poker players have caught over the last year or so and people will actually donate to help their cause...weird!

Anyway, jpatche plays 1000nl and 2000nl (4 tables) online at Bovada which keeps their players anonymous.  He uses a HUD but with anonymous players it only tracks for each session as being played.  He gives some good commentary and you can chat with him as he plays.  He has over 150 viewers as I watched him play on Monday.

Another entertaining streamer is the now notorious StickyRice who ran $2000 into $40,000 in one night on Bovada.  He streamed the entire run and you can watch at the link below...

Check out twitch.tv when you have a chance...pretty neat!

Still on a great run but my number of hands has dropped.  Only up to 2308 hands through today and I will need to play hard if I plan to get in 5000 hands this month, as I had hoped.  Profits are still great as I have moved thru 50nl into 100nl and I won a short session before my connectivity issues hit me again. 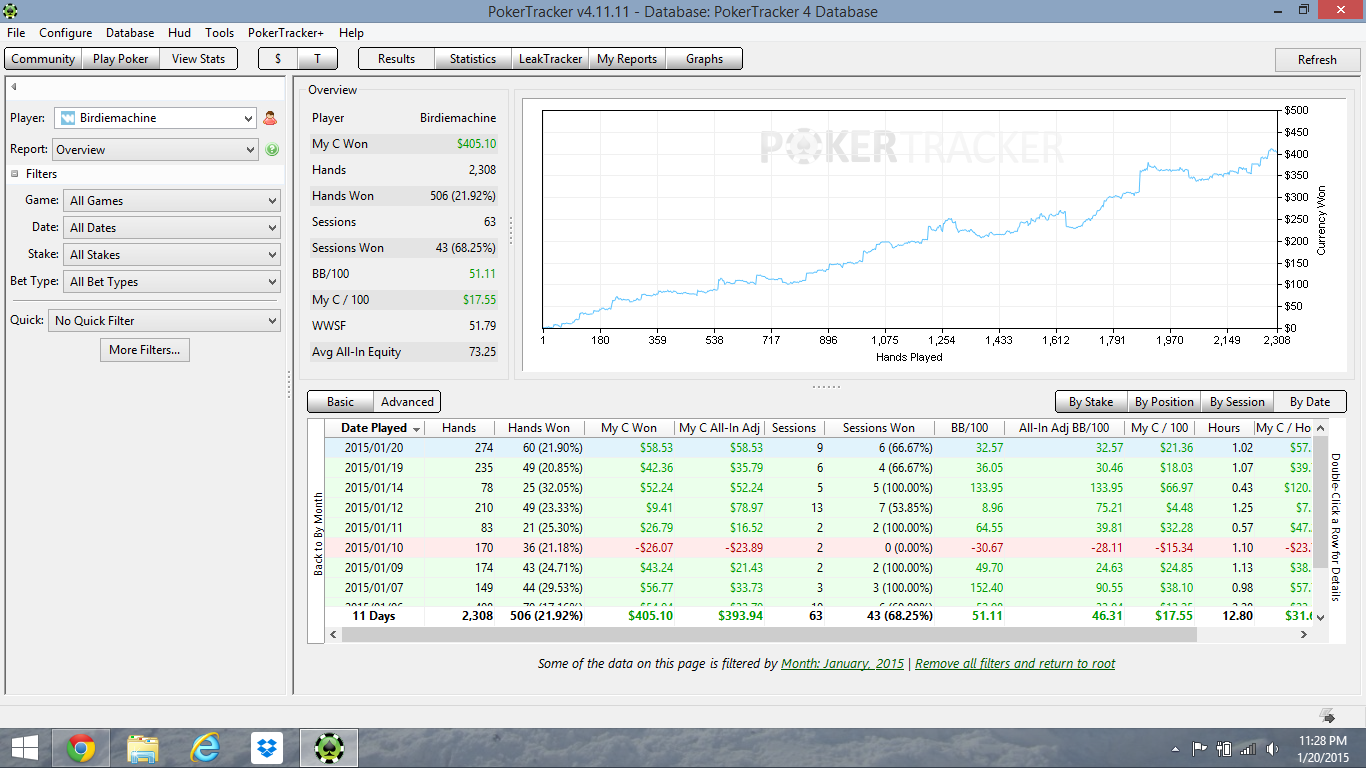 Posted by birdiemachine at 11:58 PM No comments: 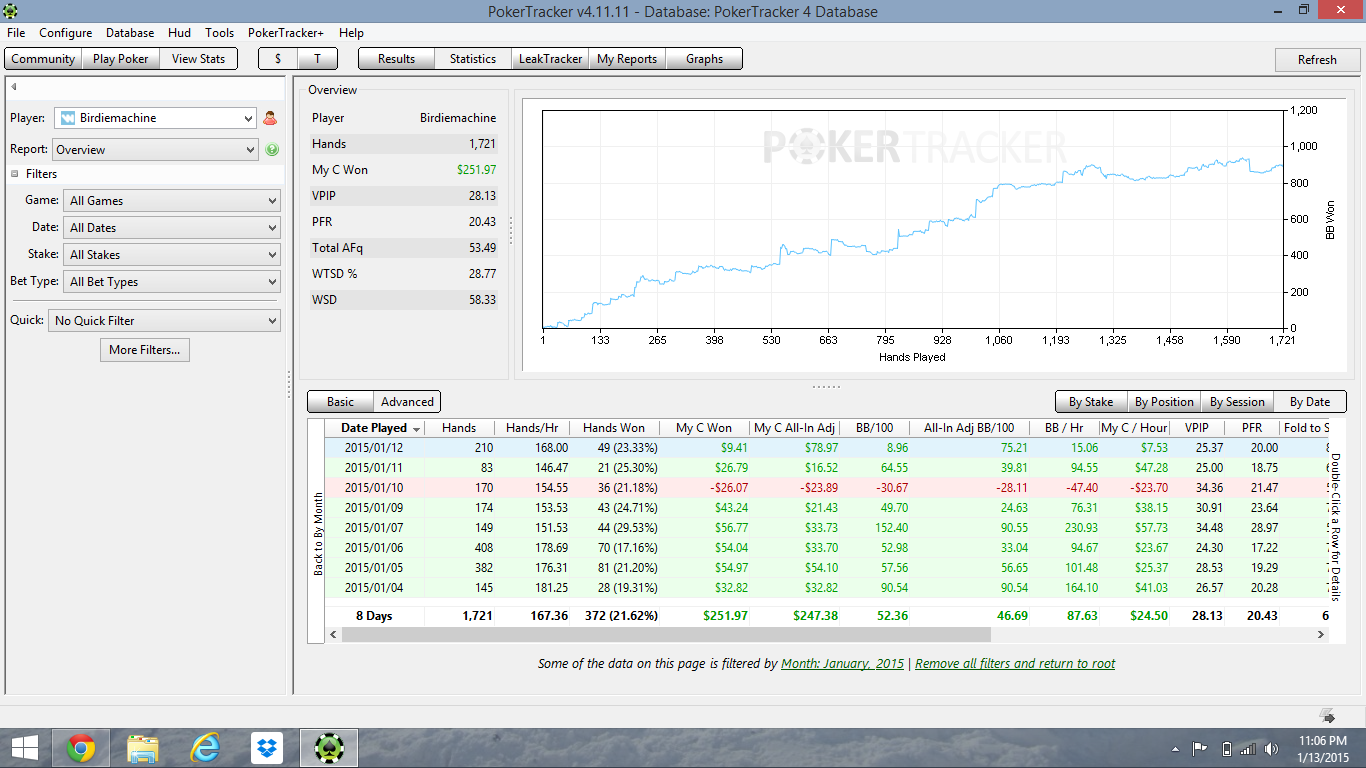 My biggest issue recently has been my internet...it keeps going in and out and a few times as I have been in some pots and timed out or had big PF hands and time out.  Really hard to play win you are on tilt from your internet service.  I may need to fire up the PC again and play with a hard-wired connection.


Posted by birdiemachine at 11:26 PM No comments:

Heater during the winter months...

It was ZERO degrees this morning when I woke up but Poker has been on a heater over the last week with profits of $198.60 in 1084 hands or 73.28 BB/100 hands.  A rate that can't continue but I hope it does.  I am finally making money on the BUTTON where I should be making the highest profit percentage...but considering the low number of hands I have in total, this will work itself out in the long run. 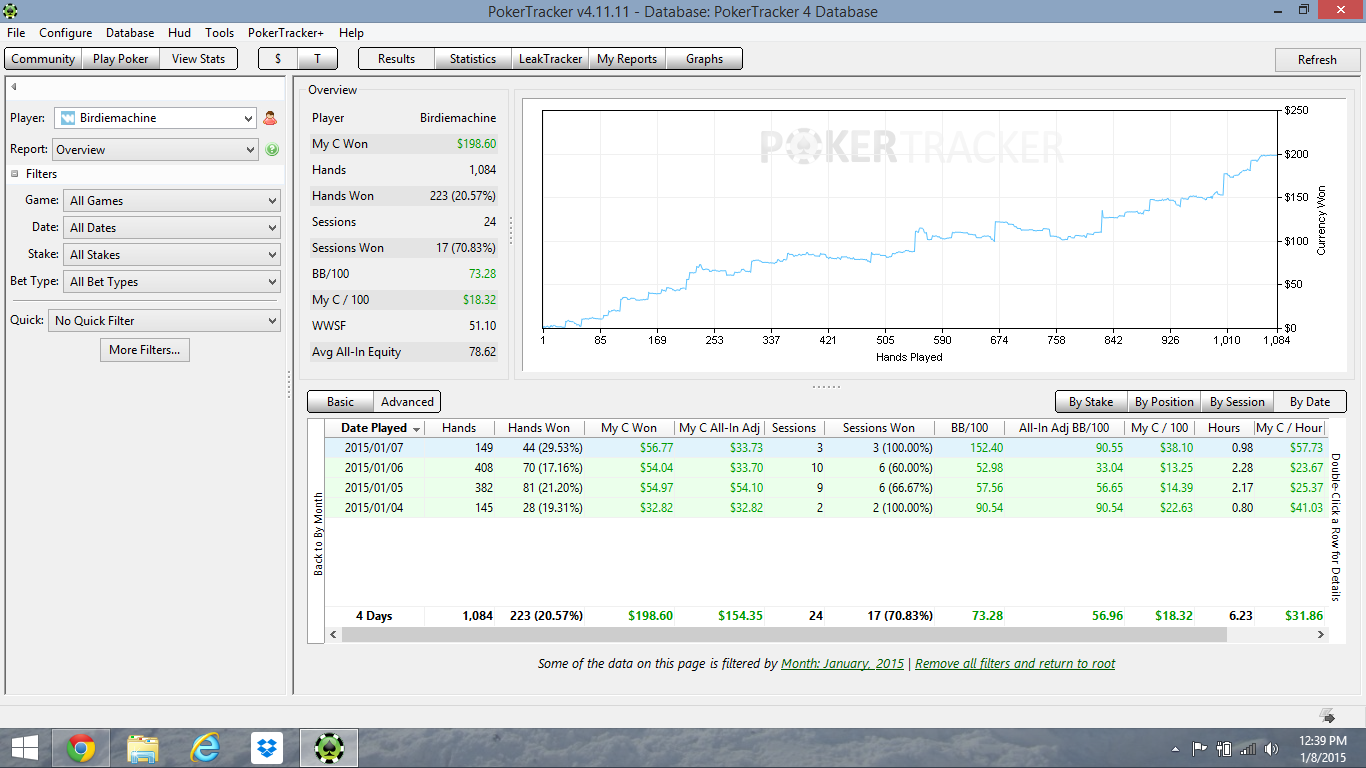 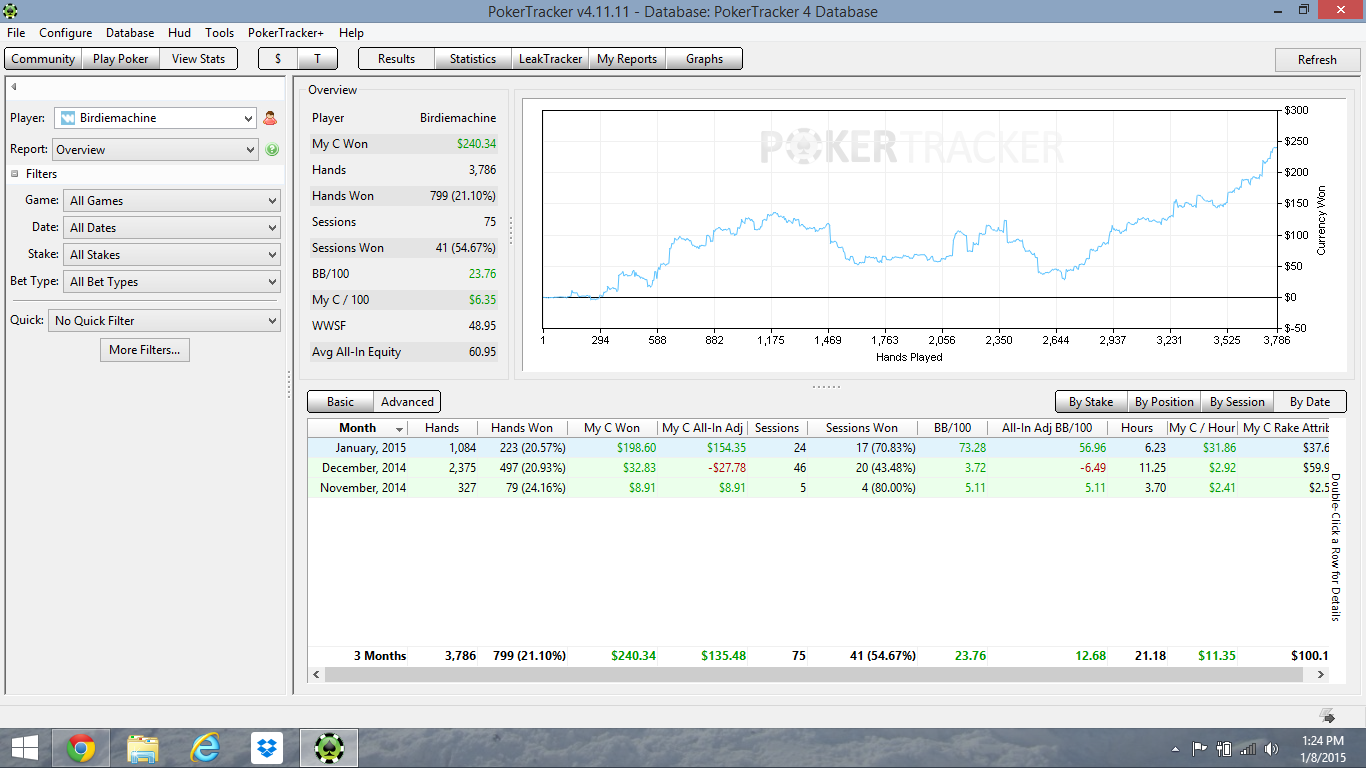 Profits and other stats by POSITION...


I wish I had my old PokerTracker stats from 2011 and prior.  I would my profit numbers looked much different in the blinds...probably a big loser in both positions.

I think may take a few shots at 50nl and if all goes I will be able to make a permanent move up in stakes.

Posted by birdiemachine at 1:19 PM No comments:


More results to add from today...Profit of $87.79 for month to date with $12 released from deposit bonus. 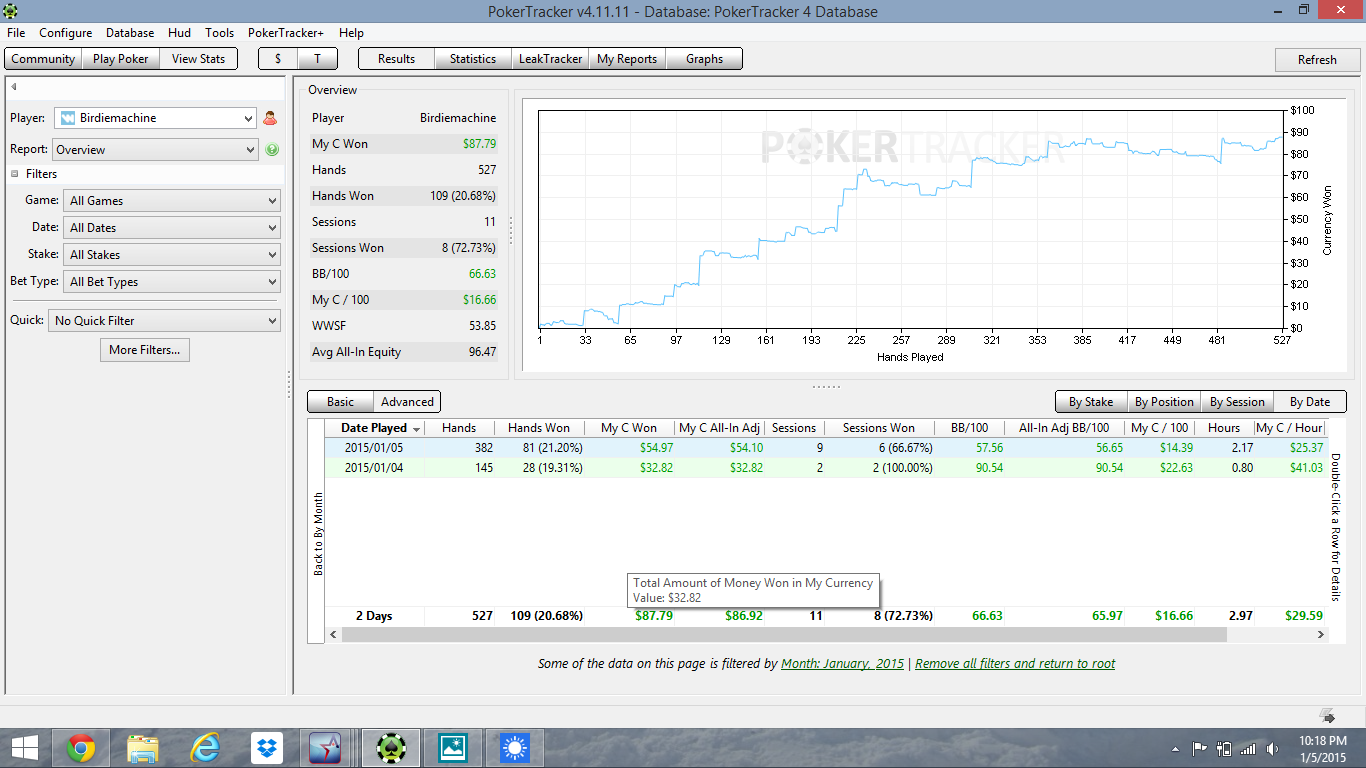 Posted by birdiemachine at 10:17 PM No comments: 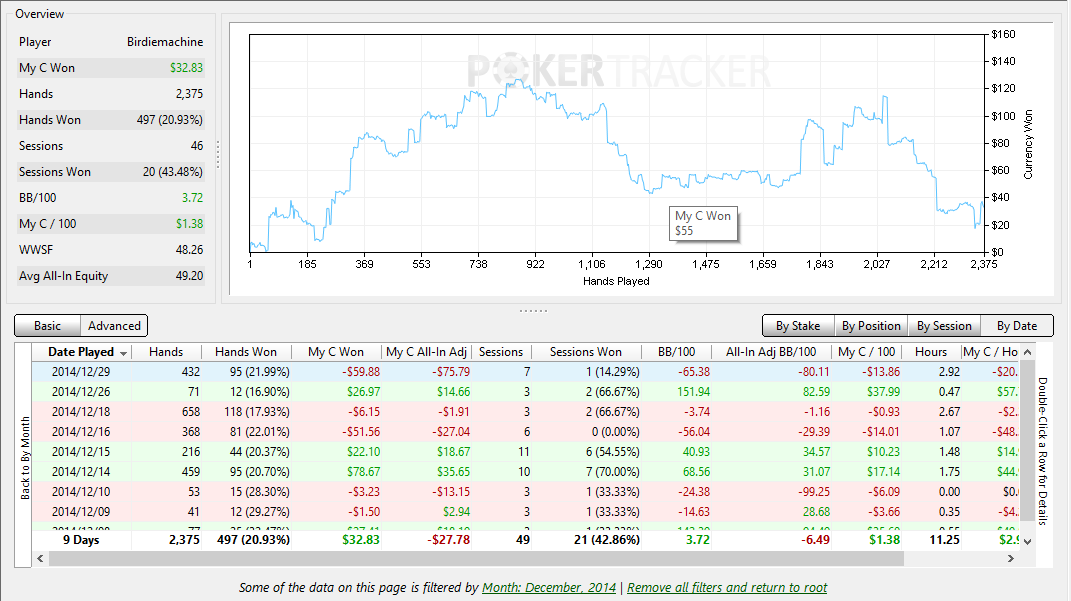 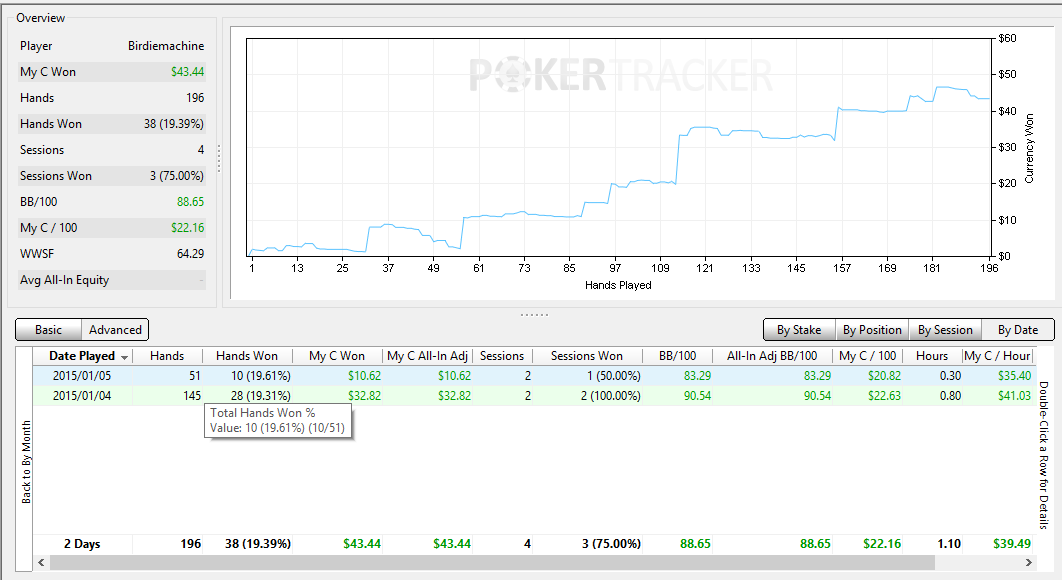 I have played 196 hands in January and have won $43.44 in that short period.  I need to play more hands in January than I did in December.  I'd like to double what I did last month and make a goal of 5000 hands.  That would be about 167 hands/day or an hour of playing 2 tables.  Looks easy on paper but it really can be difficult putting in the time.

I also released $11 of my deposit bonus from ACR...still need rakeback...

Posted by birdiemachine at 2:23 PM No comments:

I have played between 2-4 tables in each session and hope to get up to 6 tables as my bankroll gets deeper.  From there we move up in stakes and hopefully keep the same win rate. 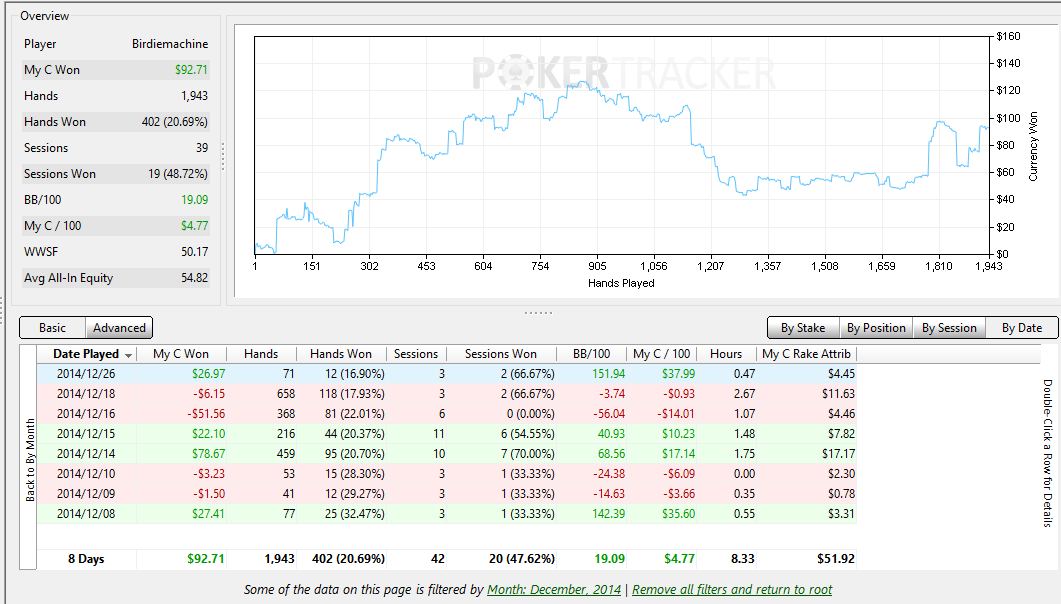 Posted by birdiemachine at 12:59 PM 2 comments:

Poker on the web